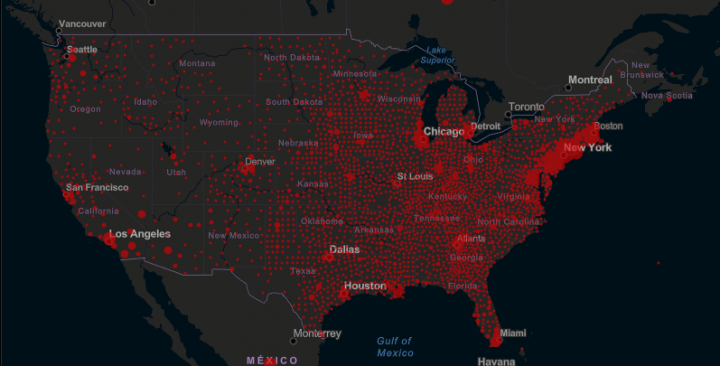 ECB minutes from the June meeting stated that monetary policy measures and fiscal response had reduced downside risks. The minutes reiterated that the bank was ready to adjust all instruments as necessary and that the PEPP emergency bond-buying programme was proportionate to counter serious risks to price stability.

Council member Mersch stated that PEPP must remain a temporary crisis instrument and that the full amount might not be needed if market tensions eased sufficiently.

US initial jobless claims declined to 1.48mn in the latest week from 1.54mn previously, although this was above consensus forecasts of 1.30mn. Continuing claims declined to 19.52mn from 20.29mn which suggested there had been further limited success in returning to work or finding new jobs, but claims remain extremely high.

Durable goods orders rebounded 15.8% for May following the revised 18.1% decline for the previous month and well above consensus forecasts of 10.9%. Underlying orders increased 4.0% for the month after an 8.0% decline the previous month.

The final first-quarter GDP reading was unchanged at -5.0% with consumer spending declining 6.8% while the trade deficit widened on weak exports.

The dollar overall held a firm tone, especially against the Canadian dollar, with defensive US currency support also a significant factor as EUR/USD tested support below the 1.1200 level. The pair edged higher to the 1.1220 area on Friday as the dollar retreated from its best levels.

Overall confidence in the US fundamentals weakened further, but this was offset by potential defensive demand given unease over the global risk profile amid nervous market conditions.

Euro-zone equities were able to secure a limited recovery on Thursday which curbed potential yen demand, although US futures remained in negative territory. Overall, USD/JPY was able to consolidate above the 107.00 level with narrow ranges prevailing as has been the case for much of June.

There were further underlying concerns over US coronavirus developments during the day. The Governor of Texas temporarily halted the state re-opening measures as infections and hospitalisations continued to increase. The US overall reported a record increase in new infections of close to 40,000 for Thursday, reinforcing concerns over near-term trends even though president Trump reiterated that there would be no renewed economic closures. US equity markets rallied in late trading with sentiment boosted by a relaxation of the Volcker rules for the US financial sector and USD/JPY was able to hold just above the 107.00 level.

Comments from Bank of Japan Governor Kuroda indicated that the central bank is likely to cut its economic projections at the July meeting, increasing pressure for further policy easing. Equity markets were little changed overall with USD/JPY holding steady amid potential position adjustment into the weekend.

The CBI retail sales index recovered to a reading of -37 for June from -50 previously and in line with consensus forecasts. Retailers were, however, pessimistic over the outlook with the July reading expected to be at -48. According to the survey most retailers expect sales to be far below where they were this time last year despite intensive efforts to make sure they are safe and open. Stock levels also remain high, increase the need to reduce inventory.

Sterling did recover some ground ahead of the New York open, but headway was limited and progress was limited by a further dip in yields with the 5-year yield at a fresh record low of -0.06% while the 10-year yield dipped to 1-month lows.

UK chief negotiator Frost confirmed that the next round of talks next week would be on a face-to-face basis and smaller with a more focussed stance. He stated that the UK did not anything to undermine the EU single market, but reiterated that national sovereignty was not up for discussion and rejected any EU reprisal measures.

Sterling attempted to rally into the New York open, but momentum faded as EUR/GBP was able to hold just above the key 0.9000 level. GBP/USD was also unable to hold above 1.2450. The UK currency stabilised on Friday with EUR/GBP trading around 0.9030.

The Euro was unable to make headway on Thursday and EUR/CHF dipped below the 1.0650 level as underlying risk appetite remained fragile. USD/CHF did push above 0.9500, but failed to hold the advance. The Swiss currency gained net support from concerns over the underlying global coronavirus trends with new worldwide infections close to a record high and the total increasing to 9.7 million.

Markets will remain on alert for renewed National Bank intervention if EUR/CHF retreats to the 1.0600 area. The single currency was little changed around 1.0640 on Friday with USD/CHF around 0.9480 as markets monitored global risk conditions.

The Australian dollar was held in narrow ranges on Thursday with a firm US dollar offset by a stabilisation in risk appetite. AUD/USD found support near 0.6850 and settled around 0.6870.

Australia reported the highest number of coronavirus cases for two month with a localised outbreak in Victoria which triggered an element of caution, although AUD/USD edged higher to the 0.6890 area as equity markets held steady.

There was a significantly weaker Canadian dollar tone as the currency failed to draw support from a recovery in oil prices. There was some residual negative impact from the Fitch rating downgrade with USD/CAD pushing to highs above 1.3650.

Crude edged higher on Friday with a limited USD/CAD retreat to the 1.3635 area.

The Norwegian krone was able to stabilise on Thursday following sharp losses the previous day, but was unable to make significant headway with EUR/NOK settling around 10.86 at the European close before a retreat to 10.83 as equity markets recovered ground.

Core Norwegian retail sales increased 2.8% in May from 4.8% previously which had little impact. EUR/NOK traded around 10.84 with USD/NOK around 9.67.

The Swedish krona was able to make headway with EUR/SEK retreating to lows near 10.45 area amid hopes for a European recovery. The krona held steady on Friday with USD/SEK above 9.30.

Euro-zone equities attempted to recover from sharp losses recorded on Wednesday and gains in oil prices provided an element of support, although overall sentiment remained fragile.

The German DAX index posted a 0.7% gain, although much of the focus was again on the Wirecard collapse. The French and Spanish bourses posted gains of close to 1.0%.

UK equities dipped lower in early trading as US futures extended losses, but there was a gradual recovery as US markets pared losses and energy prices rose. The FTSE 100 index closed 0.4% higher, although domestic indices declined.

Underlying Wall Street sentiment remained cautious on coronavirus developments, although there was support from the banking sector amid an easing of Volcker rules on derivatives trading. The S&P 500 index posted a gain of 1.1%.

US future held steady on Friday with the recovery from losses underpinning Asian bourses.

After sharp losses the previous day, oil prices recovered some ground on Thursday with an element of support from the US data releases, although there was still an important element of caution given concerns surrounding over global coronavirus conditions.

There was, however, evidence from satellite data that traffic levels have picked up in China and Europe which will increase fuel demand.

Gold was hampered by a firm dollar, but found some support above $1,750 per ounce and regained ground in New York to trade little changed.

Silver was able to recover some ground after Thursday’s losses and advanced to the $17.80 per ounce area after finding support near $17.50.

After sharp losses during Wednesday, cryptocurrencies secured a gradual correction on Thursday as risk appetite stabilised.

Bitcoin was able to resist a further test of the $9,000 area and secured a gradual recovery to near $9,300 as US equity markets made limited headway.

Prices drifted lower on Friday with bitcoin near $9,250. Risk conditions dominated during the day, although there was an underlying element of concern over regulatory issues.

Ether was held in tight ranges and settled around $233 with no significant change on Friday.