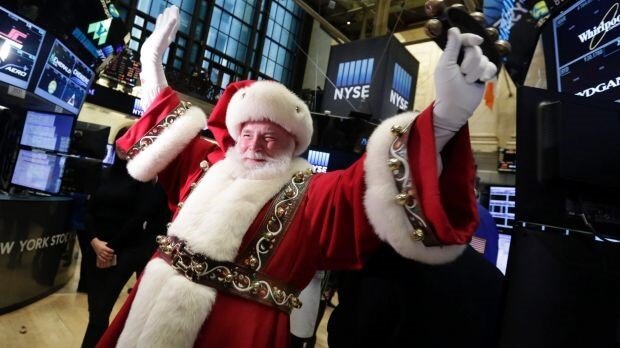 Will the run into Christmas prove to be the most wonderful time to trade?

2018 has been a tough one for stock market participants with the FTSE 100 having traded in a large range. The year began with much promise as the FTSE 100 index was trading at all-time highs, this was then followed with a sharp 12% sell off which bottomed out in March. The subsequent recovery was equally as sharp with a 15.2% rally taking place in the space of 8 weeks from March to May. A new all-time high of 7904.4 was set on the 21st May 2018 and since then the FTSE 100 has been in gradual decline with constant uncertainties surrounding Brexit and global trade wars driving investors away.

Now with the end of the year in sight, it’s time to turn our eyes to a potentially wonderful time of the year to trade. The folklore traditional end of year gains now commonly known as the ‘Santa Rally’ could bring a rewarding end to an uncertain year for canny investors. While not 100% consistent that it will occur each year, the historical statistics do look appealing, with changes in market conditions often pointing to a rally as the calendar year ends. In fact, it has often been argued that collectively investors create a self-fulfilling prophecy. This report is designed to help you identify which blue chip equities have fared historically well in order to decide on the potential best trading opportunities as we see off a turbulent 2018. European markets have had a poor 6 months, but could we be about to see a strong finish?

Traditionally, equity prices tend to trend higher at the end of October and builds up towards the year end, often with a surge into December. Since 1970, equities have seen relatively strong performance between November and April ending with the ‘Sell in May effect’.

Back to December, it has been suggested that fund managers tend to rid themselves of their poor performing stocks and add the best to their portfolio to boost their year-end report for their clients. The assumed outcome is a hoarding of the most in demand stocks, which alongside the increased volume of trades, prices increase quicker than any other time of the year. 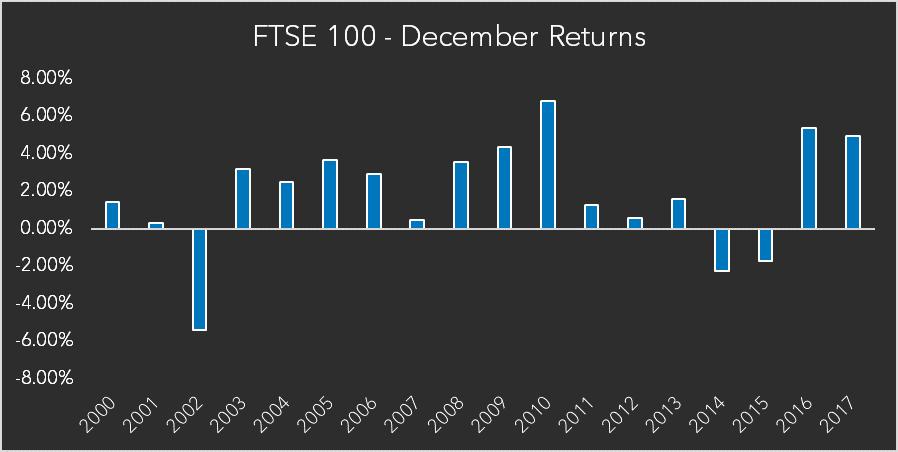 So, the FTSE stats make for good reading, on average since 2000 its returned 1.86%. If we were to buy at the start of the month, then we have a good chance of making some money. However, if we take a deeper dive into the numbers, what we find is that December tends to be quite volatile.

We have looked at the difference between the lowest and highest trading prices of the FTSE 100 since 2000, and the numbers are very revealing.

With an average return of 1.86% and an average range of 6.10% there is clearly opportunity for bigger gains, but when is the best time to enter?

If we look at the average drawdown in December, so the largest difference between the first day of the month to the lowest price of the month, then we can start to work on timing.

The smallest drawdowns were in 2005 & 2010 when the first trading day of the month was the lowest price of the month.

Armed with this information investors can be saved from an emotional rollercoaster over the Christmas period and instead approach this with a little more cuteness to maximise gains.

History has shown over the past 17 years that there is a high chance of a pullback of over 1% in the month of December, it could therefore be worth delaying the Christmas shopping for a few days.

So, we have looked at the FTSE100, but what about its constituents? Are there any patterns here that have the potential to be even more lucrative over the Christmas period?

We have run the numbers for the performance of sectors since 2000 in the month of December broken down into FTSE350 Sectors. 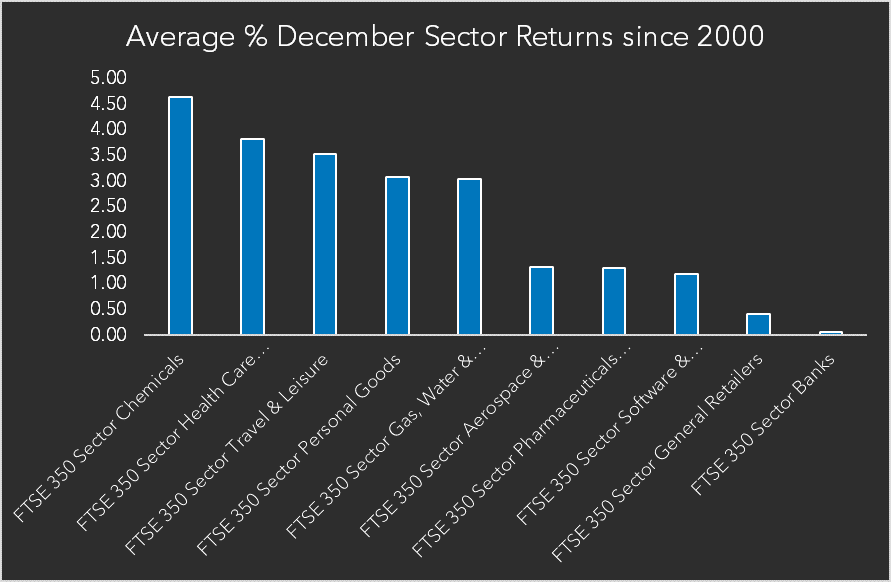 Using this information, we have drilled down to the next stage by finding the best and worst stocks on both a technical and fundamental basis to buy and sell over the month of December within these sectors during the December period.

Here are our top 5 buy picks for December.

The stocks listed above have typically outperformed in the month of December and currently score well in our fundamental model. Technically the shares have potentially bullish setups and have registered outperformance versus the FTSE 100 is recent months.

The stocks listed above have typically under performed in the month of December and currently score poorly in our fundamental model. Technically the shares have potentially bearish setups and have registered under performance versus the FTSE 100 is recent months.

There are various ways of playing the ‘Santa Rally’ here are a couple of examples:

The FTSE 100 has an average return of 1.86% over the past 17 years. Buying at the beginning of January and closing and the end of the month offers one potential opportunity. Alternatively, you could wait for a pullback intra-month. The average pullback from the beginning of the month to the low of the month is 2.83%, this has historically been a better strategy, although there have been 2 years in the last 17 where the lowest point in the month was the first trading day in December.

Pros: Buying the FTSE100 offers the most diverse route to market, rather than focusing on individual stocks. By making only one transaction it means that broking fees are typically lower. Margin requirements tend to be a lot lower for indices, meaning it is possible to leverage positions without parting with large amounts of capital. Most importantly the statistics support the case for buying the FTSE in the month of December.

Cons: Currency risk has been very prevalent over the past 18 months as Sterling has been on a roller coaster ride. Due to the international makeup of the FTSE100, a number of its constituents earn a high percentage of their revenue away from Sterling. This has had a very positive impact of stocks in the mining sector and from other huge non-UK corporations like HSBC (the largest by market capitalisation in the FTSE100) this stock alone could move the direction of the whole market.

Pros: Trading individual stocks has the potential to be more lucrative than trading in the main indices. The stocks mentioned are all trading in long term uptrends and the sector performance is also supportive. This is also relevant on the short side. The stats are over a 10-year period and these names have consistently outperformed/underperformed.

Cons: Trading individual stocks has its own risk. Stocks can be moved by stocks specific news which can create large spikes in price. Broker upgrades and downgrades have the potential to create large swings in price. It is also important to keep an eye on when companies are reporting and whether they are due to pay any dividends.

Dec dates for the diary

Here are some important dates for the diary in December that could potential offer some excellent trading opportunities.

Holidays: London Stock Exchange will close early at 12h30 on the 24th and will be closed all day on the 25th and 26th.