US CPI inflation data was mixed 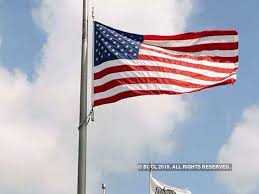 The ECB maintained interest rates at zero at the latest policy meeting. There was also no change in forward guidance with interest rates expected to remain at current levels until at least the end of 2019. According to bank President Draghi overall risks to the growth outlook were still tilted to the downside and the slowdown was likely to be longer than expected previously.

Overall inflation pressures were muted, although there was stronger upward pressure on labour costs and inflation was expected to rise over the medium term. Draghi reiterated that an accommodative monetary policy was needed and the rhetoric was generally dovish, especially with comments that too-low inflation would not be tolerated.

The Euro retreated after Draghi’s comments with EUR/USD dipping to lows around 1.1230. The US currency, however, came under sustained pressure later in Europe and the Euro regained ground. According to minutes from March’s Federal Reserve meeting, a majority of policymakers expected interest rates to remain steady during 2019, although some members thought that a modest hike in rates could be warranted later this year. A majority of the committee reiterated that the patient stance was needed given uncertainties surrounding the global economy and financial markets.

Several policymakers also wanted to stabilise the level of reserves by resuming purchases of Treasuries once the balance-sheet runoff is completed. The rhetoric was generally dovish, but the dollar had already lost ground which curbed further selling. The US currency stabilised on Thursday, but underlying sentiment remained fragile and EUR/USD held around 1.1275.

Risk appetite was dampened US consumer prices increased 0.4% for March, above consensus forecasts of 0.3% with the year-on-year rate at 1.9% from 1.5% previously. There were strong gains in energy prices on the month while apparel prices declined sharply. The increase in core prices was held to 0.1% with the annual increase slowing to 2.0% from 2.1% previously and compared with expectations of 2.1%.

There was a measured initial reaction to the mixed data, but Treasuries gained ground after the New York open with the 10-year yield declining to below 2.48%. Equity futures also lost ground and USD/JPY dipped below 111.00 into the European close. Treasuries briefly dipped after the Fed minutes, but the dollar was failed to gain traction.

There was caution ahead of China’s latest trade data due on Friday and most Asian equity markets lost ground which curbed potential yen selling. USD/JPY held close to 111.00 as benchmark US yields remained below 2.50%.

UK industrial production recorded a 0.6% increase for February compared with consensus forecasts of 0.1% with a marginal annual increase. Construction data also beat consensus estimates, although there was a wider than expected trade deficit. Sterling was boosted slightly, although global moves tended to dominate, especially with caution over the EU Summit.

Wider dollar losses allowed a GBP/USD move above 1.3100 against the dollar with EUR/GBP settling just above 0.8600.

The RICS housing index recovered slightly to -24 for March from -30, but politics dominated. The EU sanctioned a 6-month Article 50 extension until October 30, although the UK can leave earlier than that if the Withdrawal Agreement is approved. Reaction was muted given strong expectations that ‘no-deal’ would be avoided, but implied volatilities declined.

There were further concerns that prolonged uncertainty would continue to damage investment and the domestic political situation is liable to become even more chaotic. GBP/USD settled below 1.3100 while EUR/GBP held just above 0.8600.

The Swiss currency lost ground during Wednesday despite a renewed decline in benchmark US and German bond yields.

There was slightly greater optimism over the global growth outlook which curbed defensive franc demand, although there was also further evidence that repeated National Bank warnings over franc strength and potential intervention was important in undermining the Swiss currency. EUR/CHF advanced to 3-week highs just above the 1.1300 level while USD/CHF edged above parity despite wider losses and there was little change on Thursday.

The Australian dollar was underpinned during Wednesday by a generally weaker US dollar, slightly greater optimism over the global growth outlook and a dip in expectations that the Reserve Bank could cut interest rates. AUD/USD advanced to 5-week highs around 0.7175.

Australian Prime Minister Morrison confirmed that there will be a General Election on May 18. AUD/USD held a firm tone, but was vulnerable to a limited correction and settled around 0.7165.

The Canadian dollar struggled to make significant headway despite fresh gains in oil prices and a weaker US currency. USD/CAD found support just above 1.3300 with the Canadian currency under-performing other commodity currencies.

The Canadian currency was unable to gain support on Thursday with USD/CAD testing the 1.3350 area despite firm crude prices.

During Wednesday, the Norwegian krone continued to gain support from the stronger than expected inflation data as markets continued to price in further Norges Bank rate hikes. Expectations of the dovish ECB stance also provided support and the firm tone in crude also underpinned sentiment.

EUR/NOK dipped to fresh 5-month lows below 9.58 and the krone held firm on Thursday with USD/NOK just below 8.50.

After gaining ground on the Norwegian krone spike, the Swedish krona was unable to sustain gains and gradually retreated with EUR/SEK advancing to near 10.45.

There was caution ahead of the latest inflation data due later on Thursday with the rate expected to decline slightly while USD/SEK found some support below 9.25.

Euro-zone equites were underpinned by the broadly dovish ECB policy tone on Wednesday with hopes for a more positive growth outlook also having a positive impact.

The Eurostoxx 50 index gained 0.2% with a stronger 0.4% advance for the German DAX index offset by no advance in Spain and Italy.

UK equities were hampered by slight GBP/USD gains with traders also reluctant to engage in aggressive positioning due to political uncertainty and the FTSE 100 index closed with marginal losses.

Hopes for US-China trade progress helped underpin US equities with the CPI data and Fed minutes maintaining expectations of a steady Fed policy and the S&P 500 index gained 0.3%.

There was a cautious tone in Asia on Friday ahead of China’s trade data. Japan’s Nikkei 225 index was resilient with a slight gain while the Australian ASX index declined 0.3% amid political uncertainty.

In its monthly report, OPEC reported a decline in March output to 30.0mn bpd from 30.5mn the previous month due in part to a further slide in Venezuelan production.

The report expected the market to tighten during the next few months due to the impact of declining output.

Crude dipped on release, but WTI found support close to $64.00 p/b and rallied to near $64.50 as overall sentiment remained strong. There was consolidation around $64.30 p/bon Thursday with Brent close to $71.50 p/b, both benchmarks close to 5-month highs.

After a hesitant opening, gold was underpinned by a weaker US dollar during the day and advanced to around $1,310 per ounce before consolidating around $1,308 on Thursday. Silver was unable to sustain tentative gains and settled just below $15.20 per ounce.

Cryptocurrency sentiment remained strong during Wednesday with support from a weaker US dollar while there was only limited interest in precious metals.

Bitcoin moved sharply higher after the European close with a spike to fresh 4-month highs above $5400.

There was, however, strong selling interest and bitcoin dipped to the $5200 area in early Europe on Thursday as long-term sellers took advantage of higher prices.

Despite a brief move above $185, Ether under-performed during the day and retreated sharply to near $170 on Thursday.